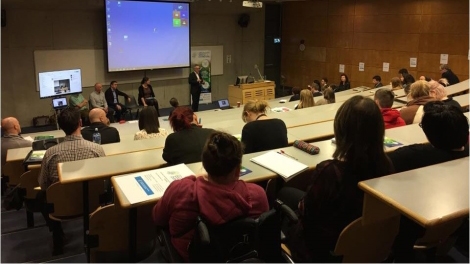 'Harnessing Digital for Donegal' workshop has been held alongside Digital Donegal Week 2017 at the Letterkenny Institute of Technology and All Aboard 2017, a national initiative to build confidence in digital skills for learning.

In that way, five experts from ERNACT, Pebble Pad, Story Burst, Donegal ETB and Pramerica have discussed and considered the impact and potential of digital field for Donegal County.

At the beginning, Paul Hannigan President of Letterkenny Institute of Technology provided the welcome address at the workshop. After that, students from Scoil Mhuire in Buncrana showcased the work done for the Ucode coding competition and showed different animations they have produced during workshops alongside Digital Donegal Week 2017, a learning opportunity to improve some of their digital skills, such as, coding. Moreover, Darragh Harkin, Crana College 5th year student & Digital Youth Council's member took part in the workshop to present this Council.

Afterwards, the invited experts started discussing about opportunities and challenges for digital in Donegal.

Colm Mc Colgan, General Manager at ERNACT
Colm has been designing and delivering international ICT and broadband projects in the various EU innovation programmes for over 20 years. He previously held a number of information systems development positions in the private sector. He presented Donegal Digital action plan, a public-private partnership composed by 8 organizations, to increase digital research and innovation, build strong Donegal digital communities and deepen the Letterkenny digital cluster.

Colin Daziel, operations director and one of the founders of Pebble Pad
Colin's background is in the media, he has worked as a television researcher and as a multimedia specialist on a computer magazine, among others. Colin spoke about Pebble Pad, a Personal Learning Space being used in learning contexts as diverse as schools, colleges, universities and professional bodies; by learners, teachers and assessors.

Therese Mc Kenna, founder and CEO at Story Burst
Therese has more than a decade of experience in national newspapers in Ireland and is a visual journalist with a keen sense of substance, context and tone of voice. She spoke about her professional experience and Story Burst, a creative content agency with journalistic craft at its core.

Ciaran Cunningham, Head of IT at Donegal ETB
Ciaran has 30 years’ experience with Donegal VEC / ETB. He manages a technical support team who provide backup to 15 schools and 12 centres. Donegal ETB moved to be a GSuite client 8 years ago. This began the move to Cloud based services. After a number of years rolling out Enterprise Wifi to all our centres, the ETB has worked with Google partners & Toshiba on a pilot to equip the students with Chromebooks.